While checking out the booths at the South Dakota State Fair a few months ago, Bruce and Diane Crevier came across a caricature artist drawing cartoonish sketches of fair attendees. They approached her and expressed their interest in a drawing, asking if the artist had ever produced multiple-faced portraits. The artist said she had, and, excited, Bruce showed her a photo of his family. Astounded at the photo, the artist gasped, “These are not all your children, are they?” The picture featured 14 smiling, light-haired faces, including those of Bruce and Diane. After the artist was done with the drawing, the Creviers walked home with an 11 x 17 in. cartoon of themselves, with the expressions of all of their 12 children, ranging from six months to 21 years old, hardly fitting on the canvas. 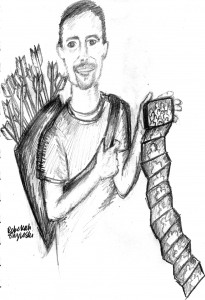 Twenty-two years ago, Bruce and Diane hadn’t envisioned themselves raising such a large family. Both grew up in South Dakota, on opposite sides of the state, and met in 1986 while studying at the University of South Dakota. After a yearlong courtship, they married and then had their first child, Jacob, in 1988. But Bruce and Diane didn’t originally see Jacob as the first of many children.

“When we got married, we didn’t plan on having a dozen children,” Bruce explains. “It’s just something that happened slowly, one child at a time. When we had our fourth, I thought that was a lot, and then when we had our fifth, we jokingly said to someone, ‘This is Josiah, our middle child!’ We didn’t know that someday it would be true.” From the time of the couple’s first pregnancy to the birth of their youngest children, their first set of twins, in November 2008, Diane has been pregnant for just under 100 months total out of those 21 years.

The Creviers’ motivation for bringing up 12 kids is rooted in their devout Christian faith. Growing up, Bruce says, he and Diane did not have a serious Christian presence in their lives. That is, he explains about their childhoods, “We considered ourselves Christians, since we were both raised in religious churches where we learned about God, but neither of us had a relationship with God – both of us were basically missing God by 12 inches – from our heads to our hearts.” Thanks to the influences of Christian role models, Bruce and Diane “found the Lord” at 14 and 16 years old, respectively.

Today the 44- and 41-year-old Bruce and Diane live the word of the Bible faithfully, integrating their religion into many facets of their lives. Conversations with Bruce are sprinkled with Bible verses and allusions, and the Creviers seek to demonstrate the morals discussed in the Bible to their children. Commenting on the size of his family, Bruce cites one passage in particular as an indication that they are a testament to God’s love. That verse, Psalm 127:3-4 (NIV), says, “Sons are a heritage from the Lord, children a reward from him. Like arrows in the hands of a warrior are sons born in one’s youth. Blessed is the man whose quiver is full of them.” With 12 children under his care, it would appear that Bruce Crevier certainly has his own “quiver” full of kids.

Psalm 127:3-4 is a commonly referenced passage in the evangelical Christian community, and since 1985, it has been promulgated by an official sect who have deemed themselves part of the “Quiverfull movement,” a more radical philosophy with intense political entanglements (see sidebar on next page). While Bruce says that his family is not affiliated with the official movement, it is clear the Creviers believe in many of the same values as Quiverfull supporters. One of the tent poles of the movement is the idea that children are God’s gift to man. Bruce says, “In our life, having a full quiver is learning what true blessings are — not cars, money, houses and other material things. We believe that true blessings in life come directly from God.” 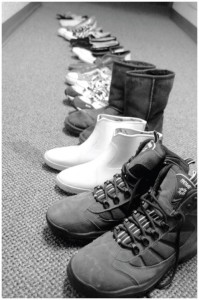 One way the Creviers exhibit their spiritual dedication is through Bruce’s full-time job at Champions Forever Ministries, the organization that manages Bruce’s Spin-tacular  Basketball Show. You see, Bruce is capable of spinning 21 basketballs on his body simultaneously, and in 2005, he broke the world record for spinning a basketball on one finger for the longest amount of time. Bruce travels across the globe, combining tricks and motivational speaking for schools, camps, churches and basketball half-time shows. The show aligns with the Creviers’ commitment to the Lord because they use it as a platform for Christian ministry – a way to open the audiences’ hearts to God. At the venues where he performs, Bruce says he shares “the Biblical principles of setting goals and living a moral life.”

The Creviers’ size occasionally earns them criticism, with some people accusing that with so many kids, two parents cannot possibly afford the time, attention or financial resources required to raise healthy children. But Bruce asserts that by virtue of being home-schooled, a necessity since the family travels about 150 days of the year for the show, each child is awarded far more attention than most public school students. Bruce also draws on his own experience of growing up with 11 siblings, reasoning, “What I lacked in attention from my parents, I more than made up for from having brothers and sisters who were and are some of my best friends.”

As for money, Bruce admits sometimes resources are stretched thin, but never to the point where it is a dire issue. The Creviers are simply careful about spending their money, making meals out at restaurants a rarity and buying food in bulk. Bruce also thinks having his children pay for their own college educations gives them more personal responsibility and stimulates them to work harder at their studies.

Not only does Bruce refute the criticisms about big families he sometimes faces, he also takes issue with the fact that his family is considered abnormally large at all. Rather, he points out, “History is riddled with many large and very large families…only in the last 40 or 50 years have they been seen as ‘out of the ordinary’ to the way that most modern families operate.” A variety of factors, among them the introduction of contraception and legal abortion, have contributed to the national downsizing of families. The U.S. Census Bureau figures indicate that in 1965, the average family size was 3.7, whereas by 2007, that number had fallen to 3.13. For this reason, Bruce refers to recent American family trends as the “Lack of Children Movement,” a diversion from the country’s history of bigger families into a new prevalence of single-parent or only-child households.

Despite his religion, Bruce says he does not expect all people to be suited to the Quiverfull lifestyle. “Having a lot of children is definitely not for everyone,” he says, adding, “I know that from what I have read, there are some people who are dealing with issues and baggage in their lives that wouldn’t allow them to handle a lot of children. There are couples who choose not to for other reasons, and we don’t fault them. But, at the same time, I think that they don’t know what they’re missing.”

The only time the brightness in Bruce’s voice dims is when he shares his views on contraception. Although he does not take issue with natural family planning and does not condemn couples who use this as a natural form of birth control, he whole-heartedly disagrees with the use of certain contraceptives, especially the pill, likening its hormonal manipulation to the effects of abortion. He quotes Jeremiah 1:5 (“Before I formed you in the womb I knew you, before you were born I set you apart; I appointed you as a prophet to the nations”) as evidence, reasoning, “If God knows us before we are even formed, I think it is important to do what he says. For birth control, there are other options available, and we think it is important to do some research before you make your decision.”

Although he and his wife strived for a Quiverfull family, Bruce says he has not foisted the idea onto his own children. “I believe it is an individual decision,” he says, “and that you need to seek the Lord in prayer.”

The oldest Crevier son, the 21-year-old newlywed Caleb, is also unsure about exactly how many kids he and his wife would like to have. He says, “Lord willing, I will be blessed to have children, but as for how many, I am not sure. You have to start with one and go from there.”

The Creviers haven’t officially decided if they themselves are ready to have more kids, but for now at least, it appears their quiver is as full as it can get.  With 11 children still living under their roof, and with nine not even high school graduates yet, finding emotional and physical space for more kids may be difficult. “We’re feeling like we’d like to take a break for the time being, if at all possible. That’s not saying that we won’t have more kids, it’s just saying that we’d like to sit back and ponder. Of course…we’ve thought that with a lot of our other kids as well,” he laughs.

If Bruce and Diane do feel the Crevier quiver has room for one or two more, one thing is certain: the next time they get a family caricature portrait drawn, they’re going to need a bigger canvas.

Be Fruitful, Multiply & Convert the World

Christians devoting their lives wholly to God is nothing new, but shifts in global cultures often prompt this devout faith to manifest itself in extreme social and ideological movements. One trend is the Quiverfull movement, a cross-denominational Christian campaign for families to refuse birth control and raise as many children as possible with the confidence that God will know when they are not capable of handling more. Nodding its head to Psalm 127, which compares children to arrows and stresses that couples should strive for a full “quiver” of these arrows, the movement began officially in the mid-1980s, primarily among home-schooling families. It has since diffused to other followers of evangelical religions.

According to Kathryn Joyce, the journalist who has become an authority on the movement, there is no centralized figurehead, though there are some leading literature and Internet resources among Quiverfull families. The “vibrant blogosphere” has served as a platform for communication and support between Quiverfull followers, which Joyce estimates to be around 20-30 thousand people.
Joyce’s research indicates that the movement is not simply about opposing birth control, natural family planning and sterilization. Hand-in-hand with this, she says, is the “deep conviction that men’s and women’s gender roles are very different. To be a proper Christian woman you have to embrace submission to your husband and your father.” She laments, “I spoke with [former Quiverfull] women who said that buying into this ideology made them feel that they were not in control to stop having children, even when faced with a life-or-death situation,” citing one case of a woman whose uterus could physically not support another pregnancy.

The movement is different from families simply choosing to have many children because its underlying intention is “advancing God’s kingdom” in today’s society. Members hope that Christianity will soon boast its own army of evangelicals ready to fight in the culture wars and affect conservative political change through democratic means.

Many Christians who live the Quiverfull way argue that history has been defined by large families, and thus, their lifestyle is simply a return to that Biblical tradition. But Joyce passionately contests this point, explaining, “Fundamentalism in general are frequently misunderstood as ‘old traditional movements.’ But Quiverfull is a modern movement that is a reaction against abortion, feminism and contraception. Yes, having many children has been a historical reality, but Quiverfull came as a response to Roe v. Wade. This is not just a traditional return; it’s something with a recent and pointed political background.”