When problems at home affect performance in the workplace 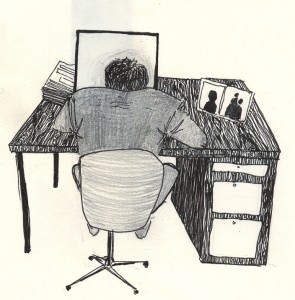 After waking up to her 6:30 a.m. alarm, taking a shower and eating her breakfast, Megan left her house to go to school, half surprised to see her father’s car still in the driveway. She surmised that once again, he had called into the office to notify them he would not be able to make it to work.  As she slowly backed out in her car, Megan’s music drowned out the list of plausible reasons for the “sick” day. Bankruptcy fee? Foreclosure notice? Divorce lawyer? The possibilities were endless.

Now an Ithaca College freshman, Megan watched her parents’ marriage of 15 years become negatively affected by an indefinite range of events. After the death of her grandfather in January 2008, the proceeding months followed a pattern familiar to many children in American households — separation, bankruptcy filing, divorce lawyers, foreclosure papers, a cop or two at the front door. This same cycle is very real for the 20.9 million Americans who have been affected by a mood disorder due to these ”trends” in the 21st century.  The National Institute of Mental Health discovered that of these 20.9 million, 14.8 million suffer from depression.

The Charted Institute of Personnel and Development showed that the second largest reason for absenteeism in the workplace, after back pain, is mental health-related issues, such as depression, stress and anxiety. On average, any given employee suffering from mental health issues will take 30 sick days due to depression and 21 days due to stress, compared to the average eight days taken by someone not suffering from a mood disorder.

E. Huyler, the Temporary Housing Assistant at Ithaca College, admitted to being preoccupied at work with personal concerns at times.

“I would think that anyone working 40 hours a week would become distracted with personal concerns at some point,” she said.

According to Stephen M. Weiss, co-author of the book Health at Work, the effects of family issues that spill over into the professional world have cost the U.S. government $150 billion in productivity. Megan’s parents would tell you that all dollar signs aside, some days just weren’t worth it.

In August 2009, one out of every 357 homes received a foreclosure filing. John and Emily’s was one of them. Unfortunately, the notice was not the first of their troubles, which began over two years ago, long before this past August.

“I wasn’t only emotionally, but completely physically drained as well,” John said. His day would begin at 7 a.m. He’d brew his coffee and head to a management position at a struggling family-owned furniture business which brought in less than $100 a day. He’d come home to find an empty house until 11 p.m. when Emily would return home from work, which always ended with an all-nighter of bickering over bills. With dragging feet and dark circles under his eyes, John was unwilling to drive to work most days. Other days, he’d make his phone call.

As their family ties became increasingly strained, so did John’s will: his will to save his marriage, his will to save the house, his will for his job. “I did everything I could, I just didn’t have any other choice,” he said as his voice faded.

In the summer of 2008, John and Emily filed for bankruptcy and divorce, a deadly combination. This created an impact on the way John performed at his job, creating an inability to focus on simple tasks, such as furniture orders and stain colors, and losing his temper with customers.

“I tried to save our marriage and our home,” said Emily, “but your emotions get the best of you, or the worst, I guess.” Emily explained that their currently pending divorce has caused both mental and emotional exhaustion.

The events occurring in the privacy of his own home became public because of the physical signs he expressed at his job. The average American spends the majority of his or her time in the workforce. The Bureau of Labor Statistics established that the average work day for employees ages 25-54 is almost nine hours long and that 62 percent of Americans working multiple jobs are employed on both weekdays and weekends. Emily works two jobs, starting at 9 a.m. and ending at 11p.m.

A family issue, such as losing the comfort of a home or the love of a family, can have an impact on an employee’s job fulfillment. Huyler said she felt the awareness of how family issues affect the performance of employees at work is becoming well known. “[The issue] enhances institutions’ flexibility and understanding of family problems, allowing for flexible work environments,” she said.

The Boston Bar Association found that 43 percent of associates stay less than three years at a firm. This lack of commitment is a loss for employees, employers and the company. Firms are aware that work-family issues increase tensions in the work environment and allow hearing a business-case argument to accommodate for struggling employees.

A Families and Work Institute study found that 39 percent of workers are not fully engaged in their work, and 38 percent will be making a significant effort to find another job.

In John and Emily’s situation, John was able to find a job that accommodated for his divorce and bankruptcy lawyer meetings. Emily, on the other hand, stayed with her job but found her employers accepting of the vacation time she requested. By actively keeping both of their supervisors informed, they successfully reduced the amount of tension that was being carried over into their professional world.

After two years of witnessing the outcomes of stress-related incidents, Megan has found that keeping your stress minimized is crucial to your happiness and success. She spends her college days embracing Ithaca’s unpredictable weather and checking in on mom and pop when she gets the chance. Megan has retrospectively realized that even the darkest of days shouldn’t black out the rest of your life. As her parents continue to move forward in their lives, she does, too.