Whenever Karen Wasserman gets a speeding ticket, a million things run through her mind. Pull over in a well-lit area, not on a dark side street where there might not be witnesses. Make sure your hands are where the cop can see them. Don’t make any sudden movements. As a white, Jewish woman from Long Island, Wasserman does not generally have to worry about police brutality. But as the adoptive mother of a black son, she has to be sure to set a good example.

Since her son is growing up without a black role model, Wasserman needs to be hyper-aware of her white privilege. She has nothing to fear when getting pulled over for a speeding ticket, but the situation could be quite different if a black man were driving the car. And so, even though Wasserman has never experienced racism in America, as a responsible parent she must educate herself about the black male experience in order to accurately prepare her son for his future.

“In terms of white parents that have adopted black children, they may be more aware of racism in our country, but they still typically are not fully aware of what their children are experiencing, or the experience of the majority of black people in our country,” said Dr. Kathryn Sweeney, an assistant professor of sociology at Purdue University who is currently working on a research project on white racial ideology. 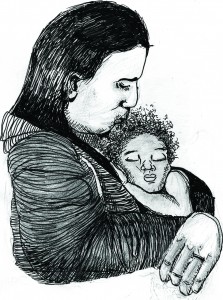 “I had to learn a lot about raising children of another race,” Wasserman said. “As a parent, you have to be very confident in the decision that you made, because something, sometime will come up and you have to be able to handle it.
“We have to be aware that our kids didn’t grow up in our world,” Wasserman continued. “Our world is not their world.”

According to Michele Fried, the founder of Adoption STAR, an adoption agency based in Western New York, the challenges of transracial adoption are overwhelming when parents are not educated about issues related to adoption and race. Prospective parents must attend classes for five weeks and complete nightly homework assignments in order to adopt through Adoption STAR.

Fried’s 22-year-old son Zachary is living proof that her focus on education and racial awareness throughout the adoption process is effective. He and a younger adopted brother are black, while Michele Fried and her husband are white. Zachary says he never felt uncomfortable with his non-traditional, transracial family.

Wasserman, a single mother, is also the singles and non-traditionals chair of the Adoptive Parents Committee. When she first began going to meetings at the APC, it was mostly made up of couples.

“Although I was welcomed I felt really out of place,” Wasserman said. “As time went by and I became a little more active within the organization, I formed my own [singles] group.” Gays and lesbians, recognizing that they also have unique experiences with adoption and parenthood, became the “non-traditional” part of the subhead.

“[Singles and non-traditionals] often have very different challenges than heterosexual couples,” Wasserman said. “I think single parents are more often pushed into a corner to accept special needs children, as are gays and lesbians, than are heterosexual couples. And these parents actually have less resources to deal with it.”

Fried and her husband are the adoptive parents of five children, some of whom have special needs. The Frieds also have four biological children. Although members of this family have different racial heritages and are not tied together by blood, Fried and her husband were always upfront about their children’s adoptions and how good it was that they were all brought together.

“I think we all were just aware from the beginning that adoption is a positive thing,” said Zachary, the eldest in the family. “Kids were never just told at some random point that they were adopted. It was built in just like getting dressed every day. We all knew who we were, who we were as a family.”

According to Sweeney, it is important for adoptive parents to be open and upfront about their child’s adoption, birth family, race and heritage.

“People who adopted in the earlier waves of international adoption tended to ignore that their children were of a different race,” Sweeney said. “They would pretend that they were just like them. [Today], white parents, in particular, white mothers, try to learn about the culture that their child is from.”

“Often times people are growing up in a very white, isolated community and are one of few people of color,” Sweeney continued. “Some parents have tried to create relationships with other people of the same race or ethnicity to have those relationships with their child, to help in that way, perpetuating culture.”

But Zachary was able to go one step further than occasionally meeting with other African-Americans in his community. Zachary’s adoption was an open adoption, where communication between him, his birth parents and his adoptive parents remained open. He says that communication with his birth family is not constant, but “at least we have the option.”

“My birth family has always seemed like extended family, like cousins that you sometimes see,” Zachary said.

Wasserman’s adoption of Max was a closed adoption, so he does not currently have the opportunity to communicate with his birth parents. However, as Wasserman puts it, the adoption experience has been “so far, so good.”

One time after school, some of Max’s friends asked him why he was black when his mother is white. As he recounted the story to his mother later in the day, she was nervous to hear how he had responded. “I think there’s a huge responsibility on the parents to give that confidence to their children,” Wasserman said. She soon realized she had nothing to worry about.

“I told them you were born that way,” Max had said.

However, Sweeney argues that adoptive parents rarely are able to comprehend the extent of their children’s racial experiences. Parents often worry about how to deal with their children facing racism that they cannot understand.

Transracial adoption brings up many issues of race and identity, and a focus on education and awareness – not simply pretending every family member is of the same race – will help transracial adoptees grow up confident in their non-traditional roles as, like Max and Zachary, black men in white families.

“The dominant ideology is a colorblind ideology, where we’re not supposed to even talk about race,” Sweeney said. “Does it mean that you’re racist somehow if you even recognize race?”