Beyond Just Hugging It Out

Chipping Away at the Family Therapy Stigma 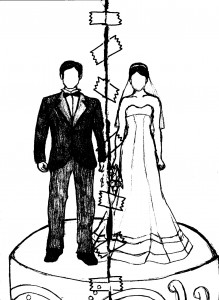 Jesse Grossman, a 17-year-old Ithaca High School student, has been to personal therapy, family therapy and even spent a little over a week institutionalized in a mental hospital. And yet, he has no qualms with talking about his or his family’s experiences.

“I’m pretty open about everything,” says Grossman. “Everyone I’ve grown up around has been hidden about [their problems].” This made it difficult when Grossman returned from his eight-day stay in the hospital, as his classmates were very judgmental. “No one talked to me. [They] just stopped.”

Therapy has been stigmatized for years. Some people assume that if you’ve been to therapy, you must be a danger to society and harmful to yourself, but the reality is that most people in therapy just need an objective listener and time to talk. While individual therapy has made many positive strides in its image over the past few decades, family therapy seems to remain in obscurity.

Our ideologies as Americans may have a strong impact on a family’s choice to attend therapy or not. “Our culture is very much informed by rugged individualism,” says Alice Meilman, a clinical social worker and counselor at Ithaca College’s Counseling Center. “You pull yourself up. You deal with things on your own.”

What does it say about a family if they participate in group therapy? In a sense, they are admitting that they are not the perfect “white picket fence” image of a family that America has strived to create and maintain.

Couples therapy began emerging around the 1930s, and, with the help of social workers examining various family units, family therapy started being utilized in the early 1960s.

In the 1970s, women began to enter the workforce in larger numbers. As a result, more women were becoming financially independent and could afford to leave an unhappy marriage. Increases in divorce and separation spurred an interest in what made relationships work or fail. This research has in turn gone into creating more specialized therapy techniques.

Grossman’s parents will be finalizing their divorce in the next few months, but no one fights anymore. In fact, therapy made it possible for Grossman to have any sort of relationship with his dad. But are all the families who should be trying therapy actually taking advantage of it?

“I don’t think it’s caught on,” says Meilman. “I don’t think, as a rule, families seek out family therapy. It involves everyone agreeing to go.” Getting everyone in a family to let their guard down and decide to try therapy can often prove impossible.

Tiffany Mulhern, a senior at Marywood University in Scranton, Pa., underwent a shifting of her family unit over the summer.

“My dad decided to leave [us] this summer. He’s been wanting to for a long time but kept it to himself.” Mulhern’s father waited for his youngest daughter, Tiffany’s little sister, to graduate from high school and begin college before ending his marriage to their mother, who didn’t see the separation coming.

“He thought he was doing us all a favor by keeping everyone together until me and [my sister] left,” says Mulhern. But although her father had his children in mind, he never considered therapy to solve his conflicts and help his family become closer instead of more detached.

Mulhern has never been to therapy. Nor has any of her immediate family. Her aunt, however, is a huge advocate. “She says it changed her life,” says Mulhern.

“She wants us all to go. It would definitely help my dad out, but he wouldn’t go. [He] makes fun of it. He thinks he knows everything and doesn’t need anyone else’s opinion.”

A family unit is a delicate system, working together and interacting in specific ways. Everyone is affected by the actions and decisions of each member of the family.

“What systems do is try to preserve homeostasis,” says Meilman. She describes how it is the therapist’s role to become a part of a family’s system while “remaining neutral and maintaining the homeostasis,” which can be tricky.

IC junior Rose Cohen-Westbrooke explains how many people have a hard time with what they consider hanging out their dirty laundry by talking to a therapist. She says, “You don’t talk about private stuff…what happens in the family stays in the family.”

Religious groups and the media have fiercely discussed the topic of degenerating family morals and social standards. No family wants to admit to being imperfect if it means possibly contributing to that claim; protecting the family image is imperative.

“Our family is where we first experience belonging. It’s a very strong connection,” explains Meilman. “Preserving the integrity of the family is a powerful motivator.” While some may see “preserving the integrity” of their family as fixing its problems, others consider respecting the family’s privacy by not talking to an outsider to be the best way to strengthen the unit.

Like Grossman, Cohen-Westbrooke has been involved in both personal and family therapy to cope with  substance abuse. Her family sought therapy as a crisis management strategy when she began to get out of control at age 14. Most family therapy is usually applied only after a major issue has come up with one of the family members and can’t be resolved in any other way.

While Jerdan suggests that families and couples “get help before it goes bad,” Cohen-Westbrooke feels that family therapy is very difficult to apply as a preventative measure. She says, “No one thinks, ‘I should go to therapy if I feel fine.’”

Meilman agrees that family therapy has a long way to go before it becomes preventative. “I don’t think people use family therapy, or therapy in general, in that role,” she says. “It more happens around a crisis with one family member.” She expresses a hope that one day it will be common for families to get regular evaluations. “Wouldn’t that be neat if we had a yearly mental health check up?”

According to Meilman and most other family therapists, the best and most effective way to conduct family therapy is with what’s called a ‘full family approach.’ Therapists will look at an individual’s personal problem that is causing stress in a family as a symptom of issues within the family dynamics. It’s a cycle that begins and ends with the family.

Unfortunately, many families will look to blame one member for causing them to need therapy. People don’t want to share the responsibility, especially if they don’t think they have a problem.

Insurance companies also enforce the idea that only one person in the family has a problem. In the Diagnostic and Statistical Manual of Mental Disorders, the leading authority on how mental disorders are handled, each diagnosis is coupled with a “V code,” which determines the severity of the condition. Family therapy does not have the proper code to warrant reimbursement to the family or the therapist by insurance companies. But if one person in the family unit is identified with having a mental disorder with a V code that allows for reimbursement, the entire family and the therapist receives money from insurance companies.

This completely flips the concept of the “full family approach.” With the blame forced onto one person, his or her problem becomes the cause of the family’s issues rather than being a symptom. It reinforces a strong individualistic attitude and also alienates one person, making them feel extremely uncomfortable. That outcome is counterproductive to therapy.

It seems that what works best to help people become more comfortable with therapy is simply talking about it. “I talk openly about it with friends and have gotten them to go see someone when they wouldn’t have otherwise,” says Cohen-Westbrooke.

For families like Grossman’s and Cohen-Westbrooke’s, family therapy failed in making them the classic 1950s family model that seems to be the goal for perfection. But they have a strong vein of communication, respect and especially love extending to all members. If anything, therapy just kept them within sight of one another, and this proximity did the rest.

“Therapy is becoming less stigmatized,” says Jerdan. “The loosening of some of the structures of our society have allowed for people to have an option rather than staying in an unhappy situation.”

The question is whether troubled families will allow themselves to be labeled as one of those families with issues and realize that they are far from being alone. Will they weigh the benefits against the consequences and come out with a pro-therapy result?

Many families feel as though adding therapy will only complicate things. This is a daunting thought that can add a substantial amount of stress to the lives of family members. A way for someone to neutralize these complexities is to oversimplify situations, which certainly happens in a family setting. This can lead to denial and repression that will only compound issues.

“We as individuals are so complex, and we’re not isolated,” says Meilman. “We live in systems, families, communities, culture. All of those things influence us.” Meilman says that part of her job as a counselor is “helping people honor the complexity that they are.”

Too often, a family will decide that the work and patience therapy requires is not worth it. They completely skip the option of talking to someone and file for divorce, or send their children away to reform school, or worse. Many don’t do anything and just remain in their dysfunctional state, which can have far worse repercussions than what therapy would bring.

While therapy is not right for everyone, it is definitely a positive way to solve many conflicts that can occur between family members. While there are still several negative connotations attached to it, family therapy is evolving and growing to become a fantastic tool for many people trying to accept that nothing, including a family, is perfect.
___________
Jocelyn Codner is a senior cinema & photography major. E-mail her at jcodner1@ithaca.edu.