Fifteen-year-old James Filtmore walked two miles to the county courthouse Wednesday morning to file for emancipation from his parents.

“It’s going to be a heck of a battle,” he said. “I’m citing extreme social embarrassment as a form of abuse. My parents are keeping me from living a fully actualized life by constantly including me in their social faux pas. They are infringing on my right to be happy.”

James filed his Petition for Removal of Minority with his parents’ credit card.
“I just can’t stand to be related to them,” James said.

The couple is very calm about the court proceedings.

“We’re actually proud of him,” Martha said. “I wish he’d have taken this much initiative with his social studies classes.”

“It’s their fault this is happening,” contends James, “It’s been breaking down ever since my dad tried to get our carpool to listen to ‘fifty cents’ on the ride to school.” 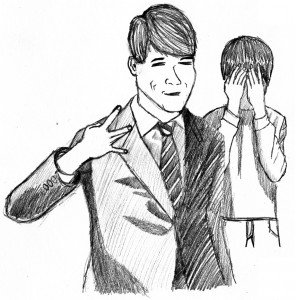 Mr. Filtmore said he was just “trying to relate to the boys on their turf” and that he “knows better now. It’s ‘Fiddy,’ not ‘fifty.’”

Perhaps to reinforce this point, he pulled a bottle of Formula Fifty Vitamin Water out of his wife’s purse and drank it down in three gulps.

James seemed incredulous at this news.

“He pulled that Vitamin Water crap again, didn’t he? He tried that on me too, you know. He was all, ‘Son, who needs a 40 when you got a fiddy?’”

But according to James, this was the least of his parents’ sins.

“I tried to talk to them about a girl I like,” he said. “But all they would do is quote song lyrics. My mom told me, ‘Bitches ain’t shit but hoes and tricks.’ I was appalled.

“I said, ‘Son, I’m not sure I entirely understand. Maybe I’d get it if you ‘did the Helen Keller and talked with your hips?’ He ran out of the room screaming. That was the last time we saw him,” Mr. Filtmore said.

“I went to stay with my friend Jesse,” explained James. “I just needed somewhere to crash. Someplace where the adults wouldn’t refer to my crushes as ‘skank hoes’ or ‘bitches.’ It’s just so disrespectful.”

“I gave our son the best advice a father could possibly give, thank you sir!” Mr. Filtmore said. “I told him all the advice that pop culture has for our children.
“He told me ‘Don’t trust a hoe,’ and ‘When it comes to condoms, put two on,’” James said. “That was his sex talk. And what is this crap about two condoms? I had health class. That’s just bad advice.”

James parents are not worried about the outcome of the upcoming court date. They said they are happy for their son’s “take it to the street attitude” but they believe he will be back in their household shortly.

“I’m the only biddy he needs,” his mother said.