A boy who in 1995 went missing in a Best Buy was found Monday and returned to his parents.

Jake Woodruff, now 17, was discovered when employee Ted Anderson asked if he needed any help.

“He just said, ‘Don’t have a cow, man,’” Anderson said of Monday’s events. “Assuming that he had misheard me, I asked him again if he needed any help, and he began singing the Friends theme song.”

Anderson then asked the boy if he was okay.

“Okay? Oh, I’m better than okay,” he said with a disturbing glint in his eye. “I’m Homer Simpson.”

Suspecting something was wrong after hearing the boy mention the repeated murder of one Kenny McCormick, Anderson reported the incident to the police.
“As they were taking him to the station, the kid seemed really confused,” Anderson explains. “He kept asking why there wasn’t any disembodied laughter.”

Kevin Thomas, the officer who initially questioned Jake, had a difficult time identifying the boy, who claimed to be an importer-exporter named Art Vandelay. It took over an hour for Thomas to identify the boy as lost child Jake Woodruff.

“I had to ask, ‘Is that your final answer?’ before he finally spit it out. But the boy 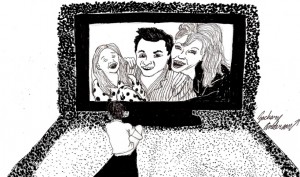 immediately reverted to his cryptic language, shouting, ‘bam!’ and throwing what appeared to be paprika all over the table.”

Authorities speculate that Jake became quickly attached to the pack of plasma screens on the showroom floor. The televisions then accepted Jake as one of their own, teaching him about subjects such as the judicial process as depicted by Law and Order: Criminal Intent. Most of Jake’s understanding of modern life stems from the cartoon Rocko’s Modern Life.

“I guess I never really thought anything of it,” he explains. “You see a lot of unattended kids at a place like that. If it weren’t for those meddling kids, I never would have quit.”

Funklin went on to admit that he wasn’t sure that he had seen a lot of unattended kids or just Jake repeatedly for the two and a half years in the late nineties that he worked at Best Buy.

However, Jake certainly isn’t the first child to be raised by a television. In March of 2009, with the closure of the final Circuit City stores, a dozen missing persons between the ages of 8 and 32 were recovered. Furthermore, experts estimate that between one third and one half of all children under 18 have a television as at least one parent.

Since the story first broke, NBC, CBS and Fox have all offered Jake Woodruff a starring role in his own half-hour television series, and rumors have been circulating the internet about a possible ABC Family TV-movie. A spokesperson for the Woodruff family declined to comment on any of these offers, but did reveal that the family will be purchasing a 50-inch HDTV and subscriptions to HBO, Starz and Showtime in order to make Jake feel more at home as he readapts himself to human society.
____________________________________
Noah Burd is a freshman biology major. E-mail him at nburd1@ithaca.edu.